Robert Parker’s Rating on our wines

Read with us the rating by Robert Parker, the most authoritative and sharp critic of our day, who has overturned wine paradigms and influenced the market worldwide. This time under the spotlight of The Wine Advocate five great wines: from Plenio and Vecchie Vigne, to Cumaro, Pelago and Campo San Giorgio. Here is what he writes about us.​

Plenio 2016 - 91
"With its first vintage released in 1995, the Umani Ronchi 2016 Verdicchio dei Castelli di Jesi Classico Riserva Plenio is a popular choice in the region and is a bottle I see in many restaurants and wine shops across Central Italy. Its popularity is easy to understand, given the fresh and transparent quality of the aromas: green apple, citrus, white peach and crushed stone appear. The wine is partially fermented in oak barrels, and the finished blend is given time to age on the fine lees. This would be a great summer wine to enjoy with a shrimp-and-avocado salad. Some of 16,000 bottles were produced."

Vecchie Vigne 2016 - 92
"Made with organically farmed fruit from 50-year-old vines, the Umani Ronchi 2016 Verdicchio dei Castelli di Jesi Classico Superiore Casal di Serra Vecchie Vigne is a fairly important white wine from Le Marche. It opens to round and soft aromas of orchard fruit, passion fruit and apricot. However, you also get zesty and green notes of kiwi and honeydew melon to keep the wine from tasting heavy or flat. In fact, this remarkable offering from Central Italy offers so much freshness and zest, you should save it for your next party-worthy seafood chowder. This is the second vintage that is made with only organically grown fruit. The wine is fermented in stainless steel and ages on the lees in cement tanks. Some of 13,300 bottles were released."

Cumaro 2014 - 91
"This is another local celebrity from Marche. I have a vivid memory of when I first tried this wine about 15 years ago (it has been in production since 1985), and I remember how it opened a world to me and my appreciation of the versatile and almost always satisfying Montepulciano grape. The Umani Ronchi 2014 Conero Riserva Cúmaro is named after the Greek name "Komaros" for an evergreen Arbutus plant that grows commonly on this stretch of Adriatic Coast. This is a plump and generous red that carries a heavy load of black fruit, spice and tobacco. Enjoy it with some roasted lamb and white beans. It ages in barrique for 12 to 14 months. Some 36,000 bottles were made."

Pelago 2014 - 92
"The Umani Ronchi 2014 Pelago is a blend of 50% Montepulciano, 40% Cabernet Sauvignon and 10% Merlot, and the first year of production of this local favorite was 1994. In fact, this bottling celebrates the wine's 20th anniversary. There is plenty of power and richness here despite the rather weaker and cooler vintage. The wine's fiber is dense and generous, and the bouquet is similarly loaded with dark fruit, smoke, tar and tobacco. It's another great steak wine from Umani Ronchi. Some 9,800 bottles, 180 magnums and 20 Jeroboams were produced"

Campo San Giorgio 2013 - 93
"This is the top-shelf wine from Umani Ronchi. The 2013 Conero Riserva Campo San Giorgio is made in limited quantities, with 5,280 bottles and 40 magnums produced in this vintage. Fruit comes from a small section of a single-vineyard planting. This is a pure expression of the Montepulciano grape, and the wine was first made in 2009. The bouquet is ample and wide, showing dark fruit tones, with blackberry and cherry in generous supply. Thanks to a sophisticated aging regime that takes the wine through one year of barrique followed by another year in large oak cask, you are also treated to pretty aromas of smoke, spice and tobacco. This is an important wine with the structure and backbone to pair with a fine cut of steak." 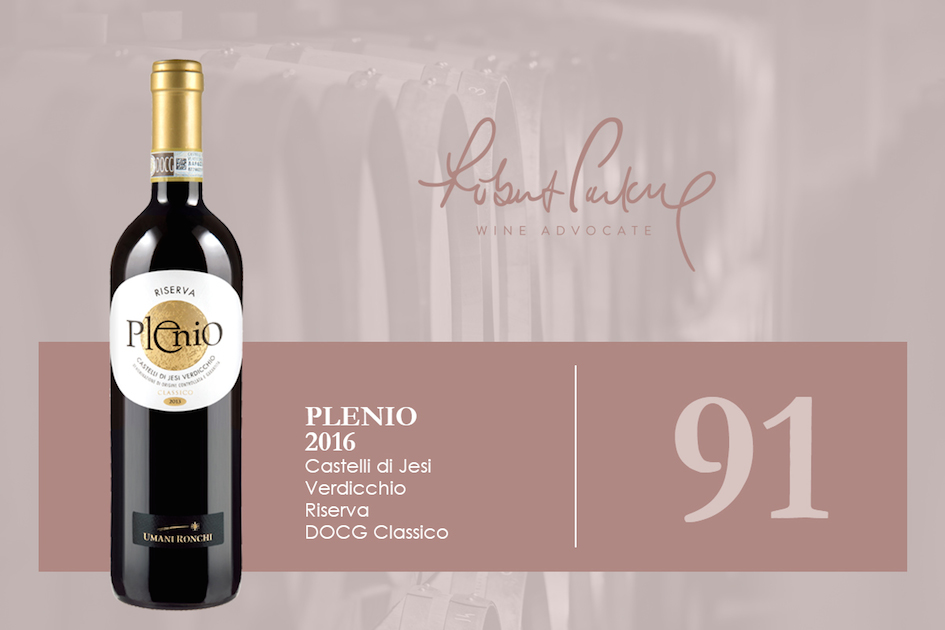 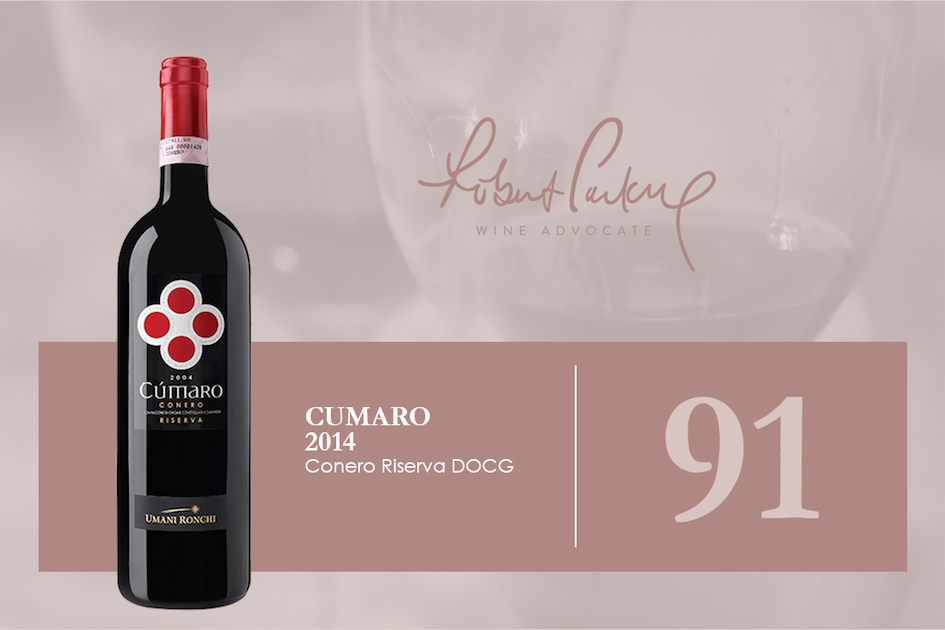 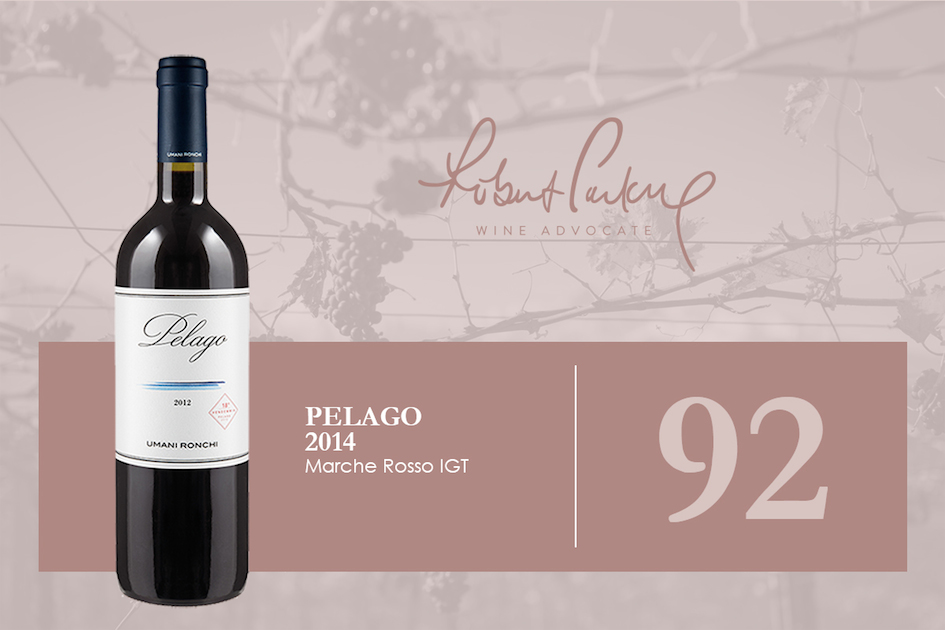 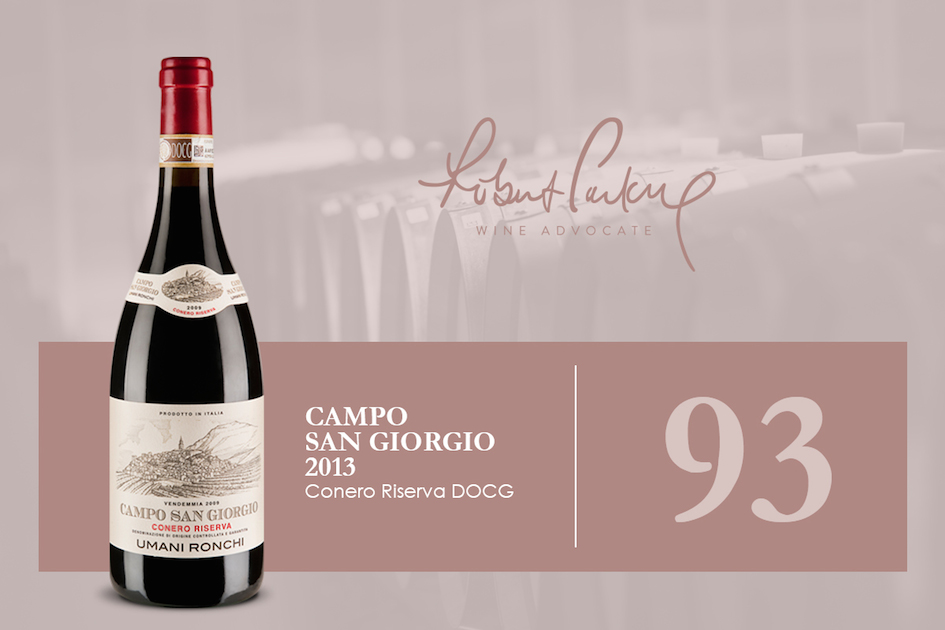